On the occasion of the 400th anniversary of Spanish-Japanese relations in 2014 various cultural events are held to commemorate this year.

And how, by selecting different artists, writers, photographers who represent this historic event. This is the case of Sonia G Caballero, considered one of the greatest exponents of art in this Hispanic-Japanese fusion.

The various technical arts used, Japanese fine art in fusion with traditional European classics, have given her work a unique and genuine character.

In Sonia G Caballero’s work there is something unique, a very personal fusion between Eastern and Western techniques and materials as well as the approach to a wide variety of styles from a self-taught and free experience. This is something that can be appreciated in her seven collections, from the very Japanese like the Sumi collection, based on the technique of lacquer like the Platinum collection and materials such as platinum and gold, or those more western like the oil on canvas works.

On July 22nd, the opening of the Spiral Exhibition took place at the Exhibition Hall of the Spanish Embassy in Tokyo. Presided by Santiago Herero Amigo Cultural Counselor of the Embassy of Spain in Japan who opened the exhibition along with Javier Sanchez de Leon Delgado of the Cultural Section and of course by our protagonist artist Sonia G Caballero. 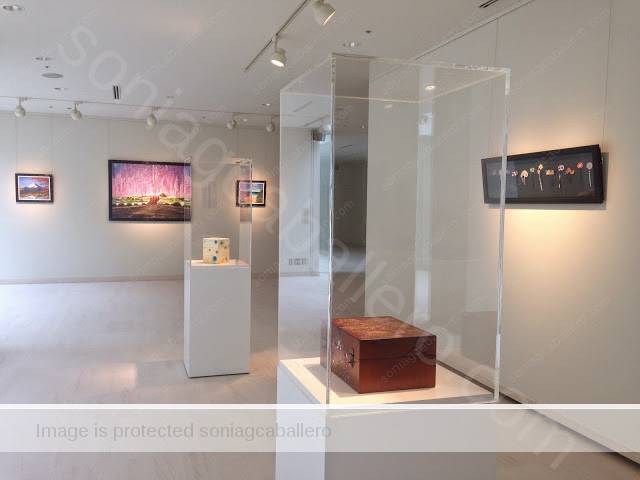 About 150 people were invited to the event and were able to enjoy the works of Sonia G Caballero and taste Spanish gastronomic products.

The exhibition can be visited until July 31.

Here are some words of Sonia G Caballero as a token of gratitude.

“I would share a list of gratitude with you. These are some of the people who have contributed to making this project possible:
First of all, my mother, Carmen Caballero, who introduced me to the world of art and has been a personal example of hard work and persistence, and, of course, my father.
My husband, Shinichiro Mikame, who has been my patron, has helped and encouraged me to make new projects, dedicating his time, love and patience.
To my children, Luis, Miguel and Sofia, who have been my energy as well as a vital source of inspiration. Santiago Herero Amigo: Cultural Counselor of the Embassy of Spain in Japan.
Javier Sanchez De Leon Delgado: Cultural Section of the Embassy of Spain in Japan (Organization and exposure monitoring · Call for Media)
Kana Miyamoto : Cultural Section of the Embassy of Spain in Japan (translations of texts and interpreter)
Daniel Yamauchi: Consular Section
Norie Nakao: Consular Section
Together with others belonging to the Cultural Section, assembly and technical areas from the Embassy of Spain in Japan who have worked on this project.
Jose Luis Ceballos · Spanish craftsman Martin Carpenter
Elena Diaz Gonzalez · Spanish Artisan
To all my teachers and people who have had a great influence on my work and have guided my path, including Mieko Sasaki sensei in Japan and Brother Jose in Spain.
Thanks to all the people from Spain have been partakers through Facebook, sharing, commenting etc.
Thanks to all who have sent flowers, cards and messages in public and private media with their expressions of affection and appreciation.
Thanks finally to all who have taken time to visit the exhibition.”